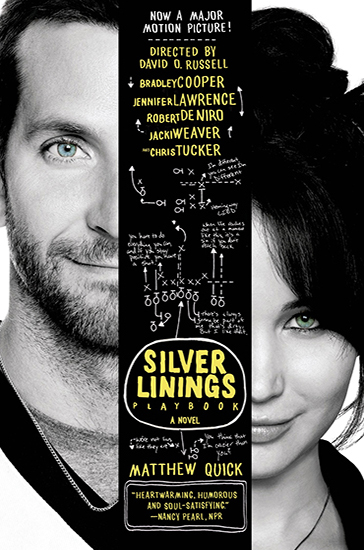 An enchanting first novel about love, madness, and Kenny G.

The Silver Linings Playbook is the riotous and poignant story of how one man regains his memory and comes to terms with the magnitude of his wife’s betrayal.

During the years he spends in a neural health facility, Pat Peoples formulates a theory about silver linings: he believes his life is a movie produced by God, his mission is to become physically fit and emotionally supportive, and his happy ending will be the return of his estranged wife Nikki. When Pat goes to live with his parents everything seems changed; no one will talk to him about Nikki; his old friends are saddled with families; the Philadelphia Eagles keep losing, making his father moody; and his new therapist seems to be recommending adultery as a form of therapy.

When Pat meets the tragically widowed, physically fit, and clinically depressed Tiffany, she offers to act as a liaison between him and his wife, if only he will give up watching football, agree to perform in this year’s Dance Away Depression competition, and promise not to tell anyone about their ‘contract.’ All the while, Pat keeps searching for his silver lining.

In this brilliantly written debut novel, Matthew Quick takes us inside Pat’s mind, deftly showing us the world from his distorted yet endearing perspective. The result is a touching and funny story that helps us look at both depression and love in a wonderfully refreshing way.

“… charming debut novel … Mr. Quick guides the reader through the mounting tension—a braiding of hope, illusion, befuddlement and newly discovered truths. Not every cloud has a silver lining in The Silver Linings Playbook, but it is hard not to be moved by the fate of a man who, despite many ordeals, tries to believe in hope and fidelity, not to mention getting through another day with his sanity intact.” —⁠Stephen Barbara, The Wall Street Journal

“Pat is a fearless narrator; even his most outlandish delusions are so candidly expressed that the reader teeters between fear of heartbreak and the hope that Pat might actually yearn his way into happiness. It’s a charmingly nerve-wracking combination … The book is cinematic, but the writing still shimmers. This nimble, funny read is spiked with enough perception to allow the reader to enjoy Pat’s blindly hopeful philosophy without irony.” —⁠Barrie Hardymon, National Public Radio

“Awww shucks. I know that’s hardly a usual way to begin a book review, but it was my immediate response to finishing Matthew Quick’s heart-warming, humorous, and soul-satisfying first novel, The Silver Linings Playbook. I also thought of starting off the review with a photo of me hugging the book and grinning like an idiot–I liked it that much.” —⁠Nancy Pearl, Pearl’s Picks, February 2009 + National Public Radio’s ‘Summer’s Best Books’ (2009)

“You don’t have to be a Philadelphia Eagles’ fan (or even from Philadelphia) to appreciate talented newcomer Matthew Quick’s page-turning paean to the power of hope over experience—the belief that this will all work out somehow, despite the long odds that life deals us. Tender, soulful, hilarious, and true, The Silver Linings Playbook is a wonderful debut.” —⁠Justin Cronin, PEN/Hemingway Award-winning author of Mary and O’Neil, The Summer Guest, and The Passage

“… plucky debut novel … Quick fills the pages with so much absurd wit and true feeling that it’s impossible not to cheer for his unlikely hero.” —⁠Allison Lynn, People Magazine

“Pat Peoples is the protagonist and the narrator of The Silver Linings Playbook. I found him compelling and fascinating, and I found myself not only caring about him but rooting for him unashamedly, which, for an author is, I believe, what they mean by scoring a tour de force. … From the beer-soaked Bacchanalian tailgating to the black holes of despair into which Iggles fans plunge themselves after a defeat, Quick is dead-on.” —⁠Bill Lyon, The Philadelphia Inquirer

“… immensely likable debut novel … Deftly timed surprises stimulate crucial revelations, and the full truth of both Pat’s sufferings and his own egregious contributions to them expand the novel’s basically simple comic-domestic texture into something far more disturbing, complex and, eventually, quite moving … its judicious blending of pop-culture experience with richly persuasive characterizations … make the book a winner. A first novel that doggedly does its own thing (we’re reminded of Frederick Exley’s A Fan’s Notes). Most readers will find Pat just about irresistible.” —⁠Kirkus

“… endearing … touching and funny debut … Pat [Peoples] is as sweet as a puppy, and his offbeat story has all the markings of a crowd-pleaser.” —⁠Publishers Weekly

“Friendship, family, connection and discovery intertwine in a marvelous way in this appealing novel … In refusing to be defeated by pessimism, Pat learns about true silver linings, not pretty happy endings.” —⁠Marilyn Dahl, Shelf Awareness, a Picks Of The Year selection

“Matthew Quick is a natural storyteller, and his Silver Linings Playbook—honest, wise, and compassionate—is a story that carries the reader along on a gust of optimism. Without shying away from the difficulties of domestic life, it charts a route past those challenges, and leaves us with a lingering sense of hope. More than a promising debut or an inspiring love story, this novel offers us the gift of healing.” —⁠Roland Merullo, author of A Little Love Story, Breakfast with Buddha, and In Revere, in Those Days

“The hero of Matthew Quick’s first novel is Pat Peoples, amnesiac optimist and absolute original, whose dysfunctional journey takes him from big-league fandom to competitive dance and a host of other modern preoccupations. This is a funny, touching performance on the part of Mr. Quick—and the beginning, I hope, of a big career.” —⁠Dave King, author of The Ha-Ha

“There are a slew of debuts out there that propelled their unknown authors to greatness: think Bright Lights Big City, Fight Club, Mysteries of Pittsburgh. The Silver Linings Playbook, the first effort from former Philadelphia teacher Matthew Quick, may do the same for this author … Though we’re only nine months into 2008, it seems pretty obvious that Quick has turned in one of the year’s best debut novels. (A)” —⁠Insite Magazine

“Yes it’s quirky, odd even, but it’s also that rare thing, an uplifting and heart-warming story that absolutely never strays into the cheesy zone. The Silver Linings Playbook is neither formulaic nor is it glib. Author Matthew Quick worked for a time in a neural health facility and the experience has clearly helped him manage a tricky balancing act, mining a mentally ill character for comedy yet never robbing him of his dignity.” —⁠Nicky Pellegrino, NZ Herald

“From The Diary Of A Nobody to Mark Haddon’s The Curious Incident … there is a particular, bittersweet charm about a guileless narrator who just doesn’t get what’s going on. Matthew Quick’s delightful debut is in this vein, and it’s a smart, touching, quirky read.” —⁠Stuart Kelly for Scotland On Sunday

“… what a journey! … Take One Flew Over the Cuckoo’s Nest, change the main character from an attitude case to a man who really wants to make his life work, and you’ve got some of the charm of Pat. Matthew Quick understands this guy and presents him squarely, with none of the special pleading that a lesser writer might employ.” —⁠Head Butler

“Matthew Quick’s The Silver Linings Playbook is something of a mini-masterpiece. It’s difficult for an author to balance comedy and drama (it’s much easier on film), but Quick manages to do it. He delivers a novel which is light and breezy to read, but one which also has considerable depth.” —⁠Movies In Focus (Book Review)

“Entertaining and heartfelt and authentic, The Silver Linings Playbook magically binds together love, madness, Philadelphia Eagles football, faith, family and hard-earned hope into a story that is both profound and wonderfully beguiling. This is a splendid novel, written by a big-time talent.” —⁠Martin Clark, author of The Many Aspects of Mobile Home Living and The Legal Limit

“… highly entertaining. Quick is a talented writer who has the ability to create magic.” —⁠Dineo Matomela, The Herald (South Africa)

“I loved The Silver Linings Playbook. It is warm, funny, and moving.” —⁠Shawn McBride, author of Green Grass Grace

“… a fun yet complex novel …” —⁠Phillyist

“A gentle, bittersweet comedy with an endearing hero.” —⁠Books Quarterly

“This compassionate, funny story was hard to put down.” —⁠Sally Kramer, Fairlady

“… a phenomenal job of balancing humor, heartbreak and the gravity of dealing with mental health issues … These characters are never written off as just crazy: Quick respects his characters too much to let them be marginalized as such. They are someone’s sister, brother, child, friend, etc. They are more than their disorder.” —⁠The Readist

— Selected by Amanda Ross for The TV Book Club (UK)