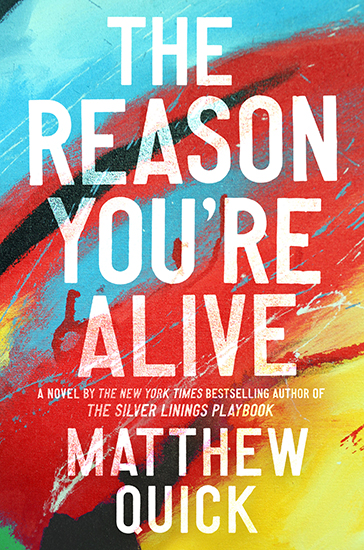 The New York Times-bestselling author of The Silver Linings Playbook offers a timely novel featuring his most fascinating character yet, a Vietnam vet embarking on a quixotic crusade to track down his nemesis from the war.

After sixty-eight-year-old David Granger crashes his BMW, medical tests reveal a brain tumor that he readily attributes to his wartime Agent Orange exposure. He wakes up from surgery repeating a name no one in his civilian life has ever heard—that of a Native American soldier whom he was once ordered to discipline. David decides to return something precious he long ago stole from the man he now calls Clayton Fire Bear. It might be the only way to find closure in a world increasingly at odds with the one he served to protect. It might also help him finally recover from his wife’s untimely demise.

As David confronts his past to salvage his present, a poignant portrait emerges: that of an opinionated and goodhearted American patriot fighting like hell to stay true to his red, white, and blue heart, even as the country he loves rapidly changes in ways he doesn’t always like or understand. Hanging in the balance are Granger’s distant art-dealing son, Hank; his adoring seven-year-old granddaughter, Ella; and his best friend, Sue, a Vietnamese-American who respects David’s fearless sincerity.

Through the controversial, wrenching, and wildly honest David Granger, Matthew Quick offers a no-nonsense but ultimately hopeful view of America’s polarized psyche. By turns irascible and hilarious, insightful and inconvenient, David is a complex, wounded, honorable, and loving man. The Reason You’re Alive examines how the secrets and debts we carry from our past define us; it also challenges us to look beyond our own prejudices and search for the good in us all.

“Quick’s prose is sharp and cutting … a compact powerhouse of a novel … subversive, unexpected, and utterly compelling.” —⁠Booklist *STARRED REVIEW*

“Quick delivers an exceptional novel … will connect with readers of Tim O’Brien’s The Things They Carried.” —⁠Library Journal *STARRED REVIEW*

“Quick’s novel does not undercut either political pole as much as the entire divisive state of modern discourse … irreverent and hilarious. Quick offers timely reminders that real people exist behind stereotypes and humanity is complex but beautiful in its messiness, even if it takes a little extra time and effort beyond a knee-jerk to see it.” —⁠Lincoln Journal Star

“Poignant and uproarious … a novel that thrums with energy … a vibrant and compassionate tale of a complex man finding his way in a divided America.” —⁠StarTribune

“… totally delightful … a funny, impactful read that goes by way too fast.” —⁠Goop

“… this is an extremely powerful book, depicting the crushing damage the Vietnam War inflicted on a generation of many of our best young men … As a psychiatrist in the USAF from 1968 to 1970 (in a non-combat role, thank God) I can attest to this book’s accuracy.” —⁠Bruce Crane, The Missourian

“Scorching … The Reason You’re Alive is narrated with ire and eloquence by David Granger …. It’s as if Holden Caulfield grew up to be a reflective, even soulful, Archie Bunker … A touching, old-fashioned drama about the ties that sometimes choke, but always bind.” —⁠BookPage

“The role of David Granger may someday be played by an Oscar-hungry actor. But that shouldn’t distract from the vivid, high-definition protagonist that already glows from the page … honesty gives this first-person narrative its potency. It also supplies the humor … This novel offers … a hope that we have the capacity to get beyond what offends us about one another.” —⁠St. Louis Post-Dispatch

“Quick masterfully teases out David’s character, showing that beneath the loud-mouthed bravado lies a deeply wounded human being … Few writers could make a character such as David likable—yet, Quick manages to make him lovable, and shows there is hope for anyone to change.” —⁠Winnipeg Free Press

“Funny, compelling, and compassionate … Quick’s merciless humor, casual tone, and affection for all his characters shines through in this fun, touching, and uplifting book.” —⁠The Federalist’s Best Books Of 2019

“Quick masterfully skewers bias from both the left and the right with humor and grace … The book is funny, tragic, hopeful and shows how our polarized views keep us from truly seeing that we’re all more alike than different.” —⁠LaSalle News Tribune

“Surprising … At the core of the novel is the voice of David Granger, a combination of Archie Bunker and Marlow of Conrad’s Heart of Darkness … A valuable addition to fiction about the tangled aftereffects of Vietnam on soldiers in the field.” —⁠Kirkus Reviews

“Matthew Quick has created a tragicomic portrait, at once disturbing and poignant, of a complex antihero … The Reason You’re Alive tells a dark yet hopeful tale that spans both sides of a fractured America.” —⁠The Sydney Morning Herald

“… the major element of [Quick’s] stories, at least the ones that I’ve read, is this: that people must be loved as they are if change is ever a possibility … The only starting point, at least from his pen, is the human being sitting right in front of you. Not who you wish they were, not who they could be if only they had the enlightening facts to get them there, not even who they themselves see themselves to be right now. Instead, love cuts right through the BS to the wounded soul below. It sees that one, damned and hoping to atone, gives them a place to stay, and gives them yet another chance at living.” —⁠Mockingbird

“Quick’s … greatest strength is the complexity in which he paints his characters. Love or hate him, David Granger’s chainsaw-toothed voice, and the stories he tells with it, will linger with you. When Quick writes characters, he wants honest portrayals. He wants their good and bad, and above all their honesty.” —⁠Northeast Times

“Think about someone in your family whose politics and biases make your blood boil. Then think about what it would take to love them (and actually understand them). This book is a hilarious study in compassion.” —⁠Musing

“It is absolutely hysterical, honest, blunt, heart-wrenching, endearing … it’s a rollercoaster ride of all the emotions … Matthew Quick is such a beautiful writer.” —⁠Narrator R.C. Bray

“Should be required reading for every American right now.” —⁠Readers Lane

“Quick has an amazing ability to build characters who are big-hearted and hopeful even in the face of great tragedy, heartbreak, and trauma. In this case, once you get beneath the camo and insults, you begin to really see Granger.” —⁠Writer’s Bone

“The Reason You’re Alive is fundamentally about the power to forgive both yourself and others … Quick forces both readers and characters to reexamine their first impressions through his narrator … In classic Quick fashion, the novel is full of intriguing supporting characters.” —⁠A.V. Club

“David’s voice is completely distinctive and compelling—one that captures your attention from the first paragraph. David’s story will leave readers laughing one minute and crying the next. Another hit from Quick!” —⁠RT Book Reviews TOP PICK!

“Must-read.” & “Quick performs a nifty literary magic trick … By book’s end, everyone will wind up loving the camouflage-wearing, knife-carrying sociopath.” —⁠Fort Worth Star-Telegram

“Quick is no stranger to creating compelling characters. You’ll be instantly drawn to his latest, David Granger, a vet who goes on a journey to explore his past while trying to understand a modern America that is constantly evolving.” —⁠BookTrib

“A poignant work and a must-read this summer.” —⁠New York Journal Of Books

“You’ll fly out the end, maybe even in one sitting, full of fondness.” —⁠Shawangunk Journal

“… we need more books like this. Books that challenge your world view regardless of where you stand on the ‘right or left’ scale. Books and stories that encourage tolerance of others, even if you don’t agree with everything that they’re saying. And not just putting people into a box or category just because they used a word that you think is racist or inappropriate. But taking the time to see where these people are coming from and not just shaming people for their thoughts.” —⁠Juliet Report

“This new novel from the author of Silver Linings Playbook spotlights an unlikely hero, and a father-son relationship, with wry warmth and humor.” —⁠National Book Review

“Granger isn’t subtle; he’s direct, brash, and opinionated, but he occasionally allows his conflicts and demons to be exposed. Bray understands this character, and his performance, which consistently hits the dramatic, shocking, and humorous notes expertly, is simply remarkable. This is one of the best matches of material to narrator this year.” —⁠AudioFile, S.P.C. Winner of AudioFile Earphones Award (audiobook review)

— Translated into Dutch, German, Complex Chinese (Taiwan), and published in the UK by Picador, in Canada by HarperCollins